During 2016 we made a number of concerts with the singer Avin Omar who initiated us with the Kurdish tradition. The encounter between her musical tradition and the reminiscence of Western art music in Makadams “Schubertbath” has been rewarding and we look forward to further cooperation. 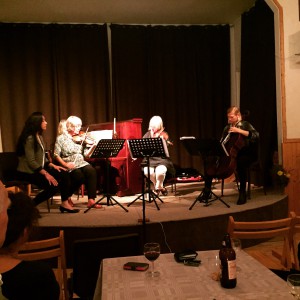 2016 started with a new musical happening. Inspired  by singer Avin Omer when she performed a solo in the Kurdish tradition, Elsa took the initiative for a first attempt to work together. During one of the first weekends of the year we played music together. We were introduced to her musical tradition where improvisation is a natural part, and she was moving freely in our reflections / improvisations based on the Western art music. It was easy to jointly make a decision to go ahead and now we are planning a number of concerts in the spring.